This scenario is much like when the Local Color brings you a dead radioactive seagull, except this time your surprisingly competent coworkers may have captured an actual live, radioactive, and displeased animal to bring to you.

It’s just another day in paradise.
[The seventh in an ongoing series of my compiled explainers for my CHOOSE YOUR OWN RADIATION ADVENTURE quizzes. There’s never really a right answer but some might work out better under the constraints of the scenario. It’s like poetry, really.] When you’re working in a sampling lab, you get used to receiving some odd things but for all of them it means reducing that odd thing to a useful form for your analytical techniques. If presented a shitting, pissing, terrified, & angry feral cat YOU DON’T REDUCE THE CAT ITSELF.  Luckily, the cat is presenting you with plentiful samples for in vitro bioassay. Just see if you can collect it without contaminating it with you own blood. That’s just bad technique. If you wanted to do in vivo counting, that’s another matter. Much like dealing with an uncooperative cat for anything else, it’s CAT BURRITO TIME to stick them in the whole body counter, though for small animal veterinary applications this is more “sit still you sonofabitch while I set the NaI probe next to you GODDAMMIT DON’T PEE AGAIN!”

This applies to all four animals in the poll, but some can be more displeased at you than others. And the questions of “Which derelict building?” & “Suspect why?” become more important. Particularly astute readers noted that all of these animals are primarily carnivores, which means they’re up a trophic level for bioaccumulation of materials. Each of these animals answer different questions because of how they sleep, how far they range and how/what they hunt. This, incidentally, is why large institutions tend to have an ecologist and/or veterinary on staff or on retainer. When what you know is how the detectors work, they can help you understand animal behavior and give context for the readings on your detectors so they make sense.

Cats, foxes, and raccoons all like to make dens in cramped hard to reach places in your derelict buildings. Coincidentally, these are the same places humans are least likely to have checked or cleaned since…ever. It’s nice of the animals to go sampling with their fur in there.

Some of you were incredulous that such animals would get into derelict buildings. Folks, this is a sign from an accelerator facility when it was still active. Life finds a way. Especially if they’re assholes like raccoons or cockatoos. 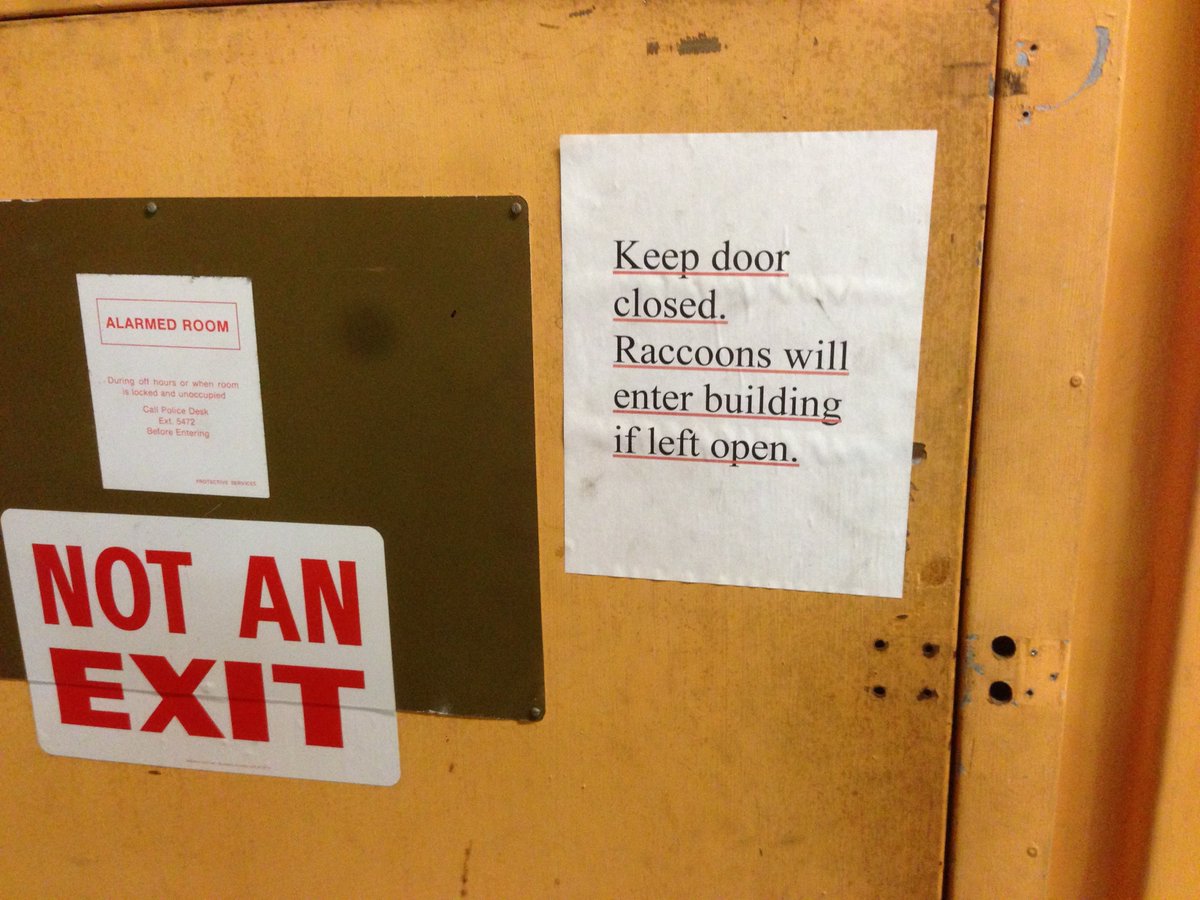 No, I will not tell you where this picture was taken.

The history of that building helps you determine what contamination you expect these animals to have picked up. Of the four, the feral cat is most likely to be living its life *entirely* in the confines of your building, with all water and food sources in there as well. Thus, the feral cat makes a good composite sample of your building.

Raccoons, on the other hand, wander anywhere they can fit for the sheer assholery of it and they do it in groups. On a positive note, they’ll help sample below grade pipes for you. Raccoons are nature’s true urban explorers. However, their range isn’t going to be limited to a single derelict building. Their range is ALL of your buildings. Your raccoon isn’t just sampling past operations, they’re likely sampling current ones as well. In short, respect trash pandas.

But not everyone is lucky enough to have their lands blessed by raccoons (pours one out for the UK). In pinch, foxes will behave much the same way but, generally speaking, the only thing the fox is going to do is sleep in your building. Compared to cats and raccoons, foxes have a much larger hunting range and their primary diet is burrowing animals. So, GOOD NEWS, the fox is a nice composite sample for any soil and groundwater contamination in the vicinity of your building. And while I like to focus on raccoons and cockatoos and the Apex Non-Human Assholes in the animal kingdom, I want to give honorable mention to foxes for things like destroying low voltage wires for monitoring equipment by chewing on them and burrowing under or jumping over ANY fence you erect. If you try to restrict a certain area to people and nature by fencing, by the time you finish putting it up there is probably a fox already on the wrong side of it. They are amazing creatures in this respect. Truly remarkable. [flips off foxes, David Attenboroughly]

Which brings us to the barn owl. If your coworkers are bringing you a live, radioactive, and angry raptor I assume you have done something to deserve this. They hate you and this is their very pointy and sharp revenge. I want to be very clear here. Unless you very, very much know what you are going DO NOT MESS WITH RAPTORS. Flappy dinosaurs will end you or, at the very least, try to take an eye. Owls are no exception to this. Speaking of flappy birds, some of you noted that owls fly. Good job! Your barn owl has similar hunting preferences to the fox but with a much larger range because flying. You can get a very current composite regional sample by waiting for the owl to hork up a fresh pellet for you. Patience, goggles and leather gloves are key.

All of these animals become radioactive because of human activity. They either:

The animals show not just what is in the ecosystem but how it’s moving and by what pathways.

The two inspiring events for this scenario come from the same building separated by mere months. When you derelict a building, it’s polite to mark are all the things in the building that are energized so that future people know they need to de-energize things before demolition. So, someone with spray paint has to go tag all the panels, conduits and piping that are still live. Sometimes those conduits are overhead and you need a ladder to get at them. Sometimes they’re outside, there’s a barn owl sleeping on top of the conduits and they don’t appreciate getting nailed with red spray paint

I understand the owl’s position fully. It had been asleep and then SOME COMPLETE BASTARD (me) woke it up by making its plumage more cardinal-like. I would have discombobulatedly flown at the COMPLETE BASTARD and knocked them off the ladder too.

Owl did not go far because it was sleepy and freshly painted. After making sure nothing was injured other than pride, I called for an animal rescue team to help clean up the poor owl. In return (revenge?), the ecology team asked me to collect all the pellets I could find. There were a lot.

On a different day, I got asked to go check the sumps in the high bay to see if rainwater leaking through the roof had managed to pick up anything and take it down to the lowest low point, the sump. A lazy composite sample of sorts in the grossest place. The HUGE sumps had long since had all the equipment taken out of them and been filled with vermiculite to absorb oil and such. Like the biggest kitty litter box you’ve ever seen, which is exactly what I discovered the feral cat colony had treated them as. This is how I got asked to sift the pit for choice cat turds for analytical purposes.

All was well until I hit the Turd of Unusual Size. It was possible there could’ve been a mountain lion that had made it’s lair in this building. Cats are cats after all…

We pretty quickly ruled out the other usual wildlife and came up with the hypothesis of a security guard taking a Sump Dump. This raised questions no one wanted to ask much less get answers to. This part of my poop sampling career came to an end.