The Black Blood of the Earth

You are here: Home / The Black Blood of the Earth

Okay, how did Black Blood of the Earth happen?

Or skip my blather and go look at the goods!

At some point, all of us start wondering how much coffee we can drink before our hearts explode. This typically happens when we are up, very late, in college with either the panic of a final the next day or have nothing particularly better to do than try to achieve acute caffeine poisoning. What do you mean you haven’t done this? Liar. You’re letting yourself down and making Baby Jesus (ten time running All American Most Valuable Jesus) cry.

My first foray into this arena involved a winter quarter introductory physics final exam. I had been gifted with a friend’s surplus espresso machine that I’d barely used, not being much of a coffee fan at that time. Also, all of us freshmen had received a gift box (sub-category: male) full of useful “male” things. One of these useful things was a packet with two No-Doze in it. I had six apartment mates and none of them had used anything other than condoms from their kits yet (as a physics major, which is tantamount to a degree in abstinence, my condoms had gone decidedly unused).

Figuring that this was going to be long night of cramming before the test, I collected everyone’s No-Doze and broke out the espresso maker. At 8pm I prepared a bowl of macaroni, popped two No-Doze, and washed it all down with the first quadruple mocha of the evening. Around 1am, I figured I’d better repeat the 8pm dosage. At 4am, I had two more No-Doze. At 6am, worried that I wasn’t feeling any caffeine kicking in, I popped four more and had another pot of espresso. The fact that I was still awake at 6am should have been a hint to me but I’d sailed far beyond the horizons of sanity by that time. The final began at 8am.

I sat in the front row of Thimann Lecture Hall 3, right leg bouncing. I was politely asked to take a quick lap around the building as I was vibrating the entire row of firmly bolted chairs. I then sat down for my test and completed the three hour exam in a mere twenty five minutes, scoring a 93%. I then had lunch with same friend mentioned in the “Origins of Funranium” car ride, introduced her to Sempervirens Falls in Big Basin State Park, drove back to my apartment and then promptly collapsed into bed, sleeping for 23 hours. I woke up with a more fiendish hangover than I’d ever experienced before or since. The body does not appreciate overexposure to caffeine any more than it does to alcohol. I didn’t touch a cup of coffee again for over a decade.

Fast forward 14 years. An acquaintance working and living in Japan went on holiday and discovered a bar with this exceptionally beautiful rig for the preparation of Viennese Triple Cold Extraction Coffee. Upon sampling this, he felt that, and I quote, “I could see colors that weren’t in the visible spectrum, and could vibrate through walls.” I looked at this I said to myself, “Hey, you’ve got enough virgin laboratory glassware lying around the house that you could probably build something like that.” Probably several somethings, actually, but that’s beside the point. 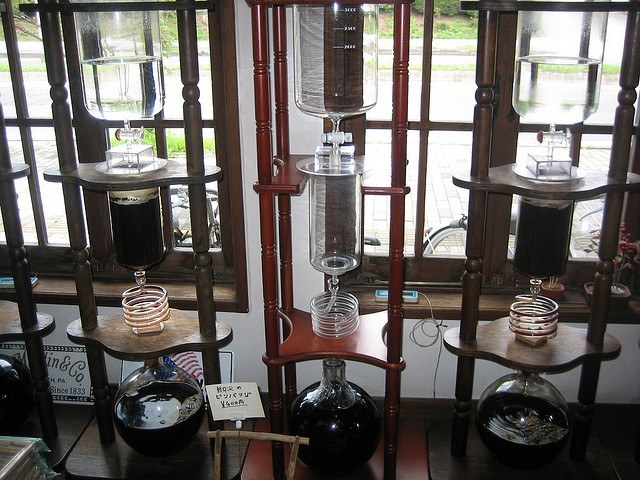 The first important question was “How do I get a coffee filter into my separatory funnels?” This sticking point and the more important one of dealing with pressure cementing of coffee in the tip made preparation with the admittedly beautiful separatory funnels difficult. See Figure 2. 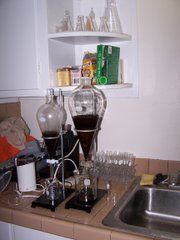 After several failed attempts, true glory was met by the third iteration of the experiment where I started by putting the grind in a 4L Erlenmeyer flask, covered it with a watch glass, and let it stand for a day. By my calculations, I produced the equivalent of 145 cups of conventional coffee’s worth of caffeine in 5.7 cups of volume. I was terrified by the idea of passing Batch 3 through this entire process two more times to achieve the coffee that my acquaintance had in Japan.  Later, I realized that this was actually a very lossy process that could stand a great deal of improvement.  I quickly moved beyond my failed apparatus and the original cold brew rig; there were improvements to be made…

The results of one pass, undiluted, of Batch 3 were remarkable:

Subject 1 (Not A Whale Biologist) showed wakefulness but no other untoward effects. He declared the coffee to be “tasty”.

Subject 3 (The World) had several sips of Batch 3 prior to breakfast with two cups of Baker’s Square coffee and followed it with the remainder of the Batch 3 mug upon return. She entered a state of hyperactivity requiring “walkies” outside, rapid speech, and much bouncing from one foot to another prior to complete burnout and crash for a period of an hour. Full recovery was made within three hours.

Subject 4 (Personal Hawaiian), had 1/4 of a cup of Batch 3 upon arrival at my house, though anectodal evidence suggests she had consumed 3 cups of “Big Island Style” coffee in the morning beforehand. She exhibited hypervigilance, emitting high pitched yelps and squeaks at the slightest noise or startling movement. She too showed the same nervous energy of Subject 3 with similar crash, though not as severe.

Subject 5 (My father) added his 100mL of Batch 3 to his half empty cup of coffee as a top off. No noticable effects. He described the coffee as “good”.

Strangley, both Subjects 3 & 4 reported a sensation of time contraction where four hours of elapsed time seemed to be no more than one hour of subjective time, tops.

When Subject 1’s cup of unadulterated was half empty, he grabbed his water bottle and poured the remainder into his clear glass coffee cup. He looks at it and then puts his hand up because He Needs An Adult. He said with concern, “I added water but it didn’t change color.” We all wandered over to peek into the dark heart of his mug. Even diluted to 50% of the original strength, it is still as black, oily, and potentially lethal as a tar pit.

While accurate, this can’t merely be called Scientific Coffee or even Weapons Grade Coffee. My brain went searching for terms that accurately described this creation. While the tar entity that killed Tasha Yar in ST:TNG came to mind, John Carpenter’s “Big Trouble In Little China” is what stuck. This coffee is the Black Blood Of The Earth (or BBotE for the sake of brevity).

Experimentation with fineness of grind led me to attempt Turkish with the reasonable scientific approach that more surface area should improve extraction. Unfortunately, the sediment and thoroughly extracted oils are quite sufficient to completely plug filter paper such that even air has a hard time passing. In the Iteration 2 process, I was squeezing the filter to get every last bit of liquid out, the paper would form these glossy black boils. I like to imagine that if Chlthuloid horrors had acne, it would look like that. With just a bit extra pressure, a fine jet of sludge sprang forth from the eldritch zit, flying several feet across the kitchen, staining all it touched…including skin.

While I initially vowed to never make the black blood with a Turkish grind again, it appears that this was primarily a matter of operator error. Subsequent BBotE batches with the remainder of my Turkish grind, since I wasn’t going to waste it, showed that I just hadn’t found the finesse to handle the extraction of a grind that fine. Live and learn, practice makes perfect, and all that. I have also become accustomed to hands perpetually stained by coffee, much like a henna tattoo or the grease ingrained in a car mechanic’s fingers.

I also did an experiment with a batch of French Vanilla flavored coffee. As one might expect, an extraction process extracts things, such as flavoring oils. All the vanilla oil that had been added to the coffee was quite thoroughly extracted and completely saturated the initial filters. Of course, as I decanted the BBotE some of those oils volatilzed and left my kitchen/lab reeking as if it were a cathouse where all the ladies of negotiable affection rubbed themselves vigorously with International Cafe. I let the first filter dry out for a couple days and then, in the interest of science, lit it on fire. It didn’t quite go up as fast as flash paper, but it did leave the most remarkable vanilla *WOOOF* aroma in its wake. No, I shant be making BBotE with flavored coffees ever again.

While I am normally loathe to agree with the elitism that causes champagne made outside of Champagne to be called sparkling wine, I do admit that source materials matter tremendously when making a concentrate like BBotE. Part of my abstaining from coffee for over a decade was due to the horrible bitterness and acidity of conventional coffee. It wasn’t until 2006 when I visitied the Captain Cook, HI co-op coffee roastery and HI Department of Agriculture demonstration station that I consumed coffee that I liked, rather than having to mask it beneath cream and sugar. The following year, I spent two weeks in Italy eating pizza Margarita every lunch, drinking fine cappuccino every morning and fine gelato in the evening. Unfortunately, back at home I was having a hard time finding coffee that didn’t need to be turned into treacle to make it drinkable.

Then I received my diagnosis as a Type II diabetic. I could no longer add sugar in the quantity necessary to make coffee from the cafe next door drinkable, but if I didn’t drink coffee I was in danger of not being able to actually stay awake through a morning of wrangling x-ray machines and radioactive materials. Experimentation began in earnest with BBotE as it promised to eliminate what I couldn’t stand the most about normal percolation coffee, bitterness and acidity.

Considering that I lack my own roaster and like to leave that variable of production to people with more expertise in this matter than myself, I produce the Black Blood of the Earth on fairly small scale. At this time, output is limited to approximately 9 liters per day. Luckily, BBotE keeps remarkably well, roughly three months by longevity tests. Some happy Test Subjects have kept their BBotE in a miserly manner and claim it is still tasty after five.  Me…I’m hard pressed to keep a liter longer than three weeks.